What happens when you take three guys, a bunch of free time, an empty gaming store and a big load of models?

Having the change to go nuts, we decided to bring all the toys out to play so we could have 6000 points of models on the tabletop and blow lots of things up. 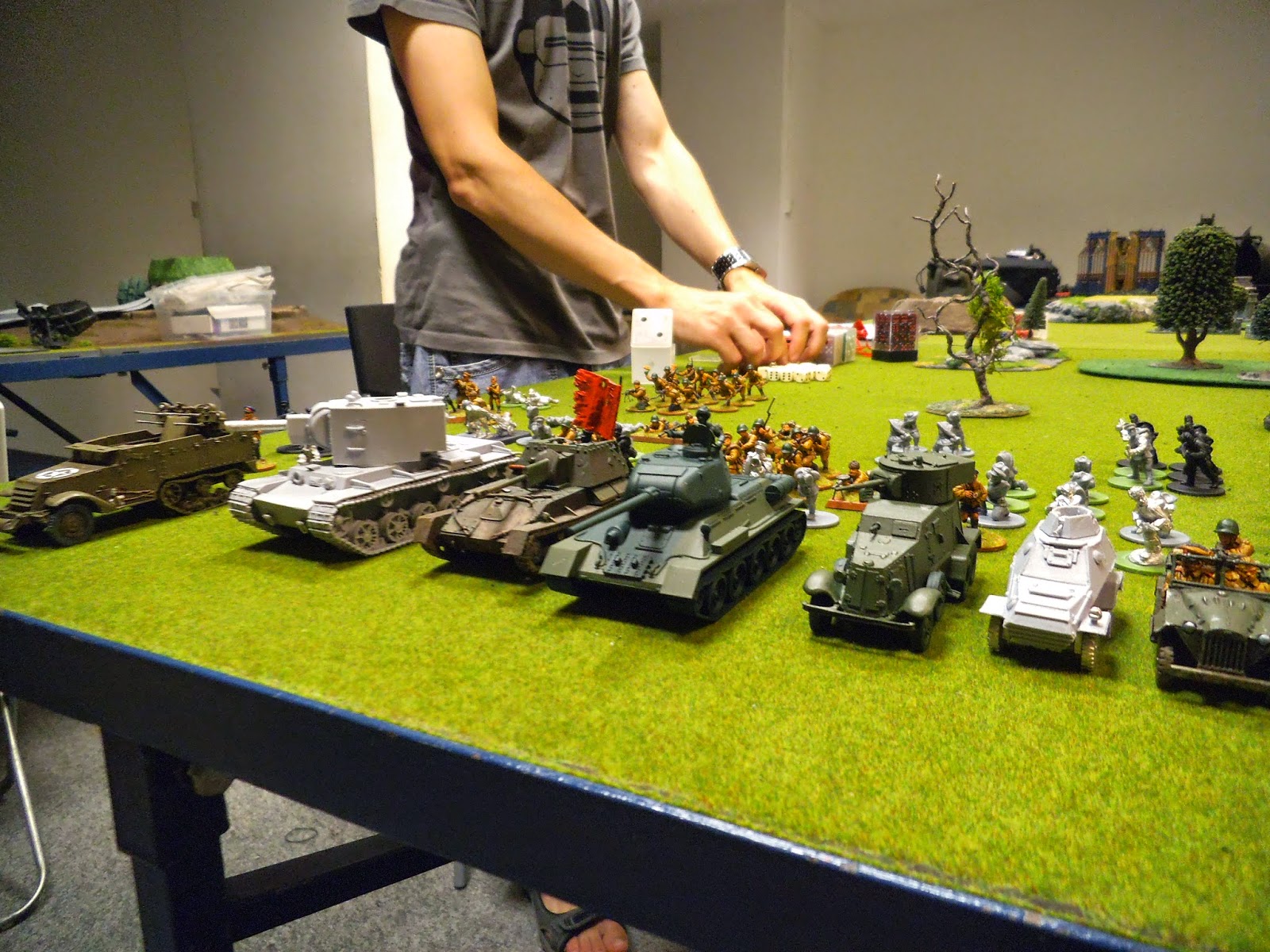 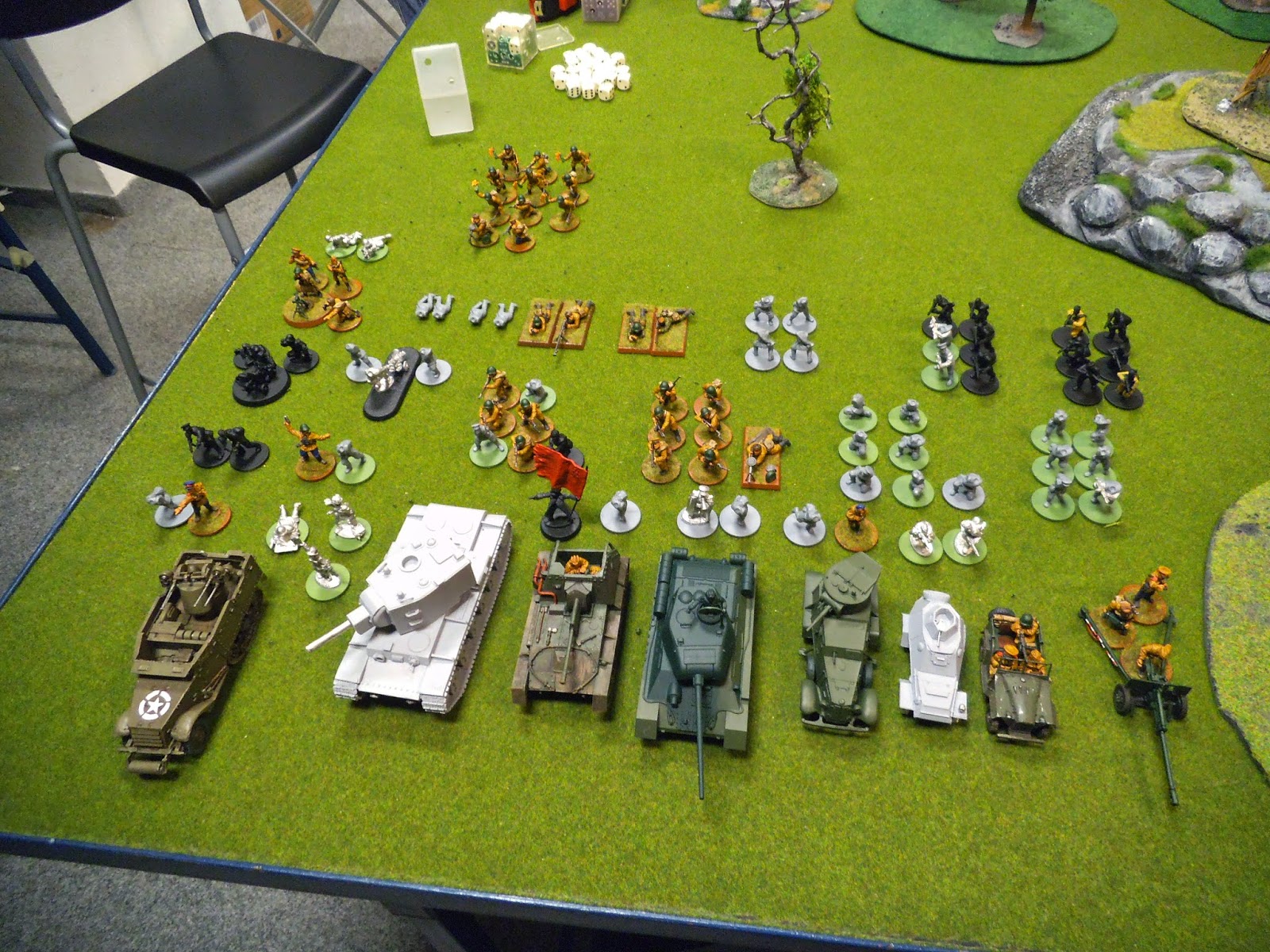 The Russian side brought a wall of armour to support their attack. There were plenty of veterans on their side but I had hope that the lack of long range AT would lead them to struggle. Then again they brought THREE artillery observers so I didn't hold out much hope for our troops to remain unpinned. 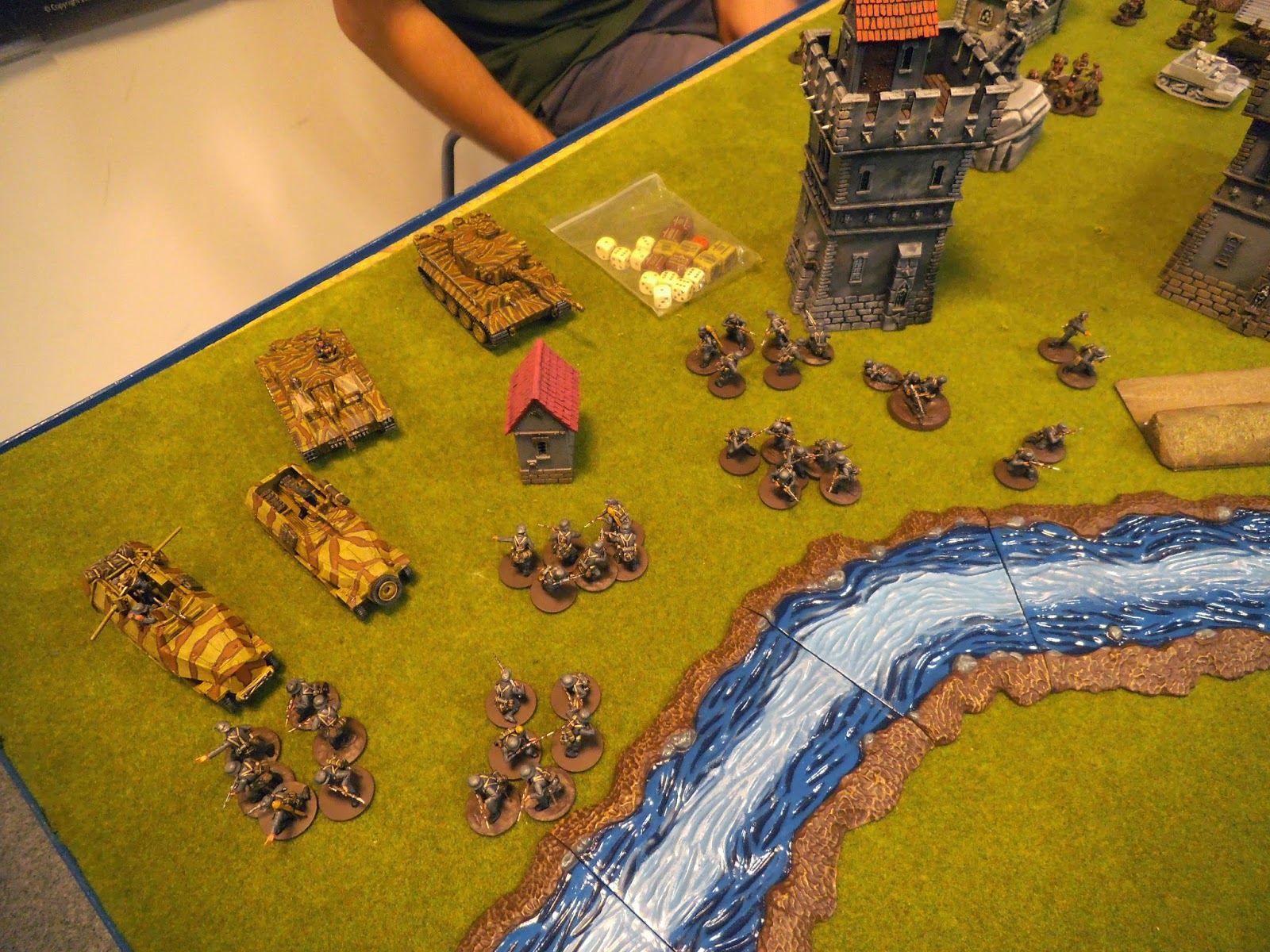 Especially since the Germans brought a veteran Tiger I. The Stug was actually played as a Sturmhaubitz since I thought we needed more anti-infantry than anti tank. Since the game was so big  I also went mean with the flame half track. I figured that if I could come on from reserve in the right position it would let me pretty much delete two units, which would be a real bonus on such a crowded battlefield. Otherwise the Germans had a few squads supported by a sniper and MMG team. 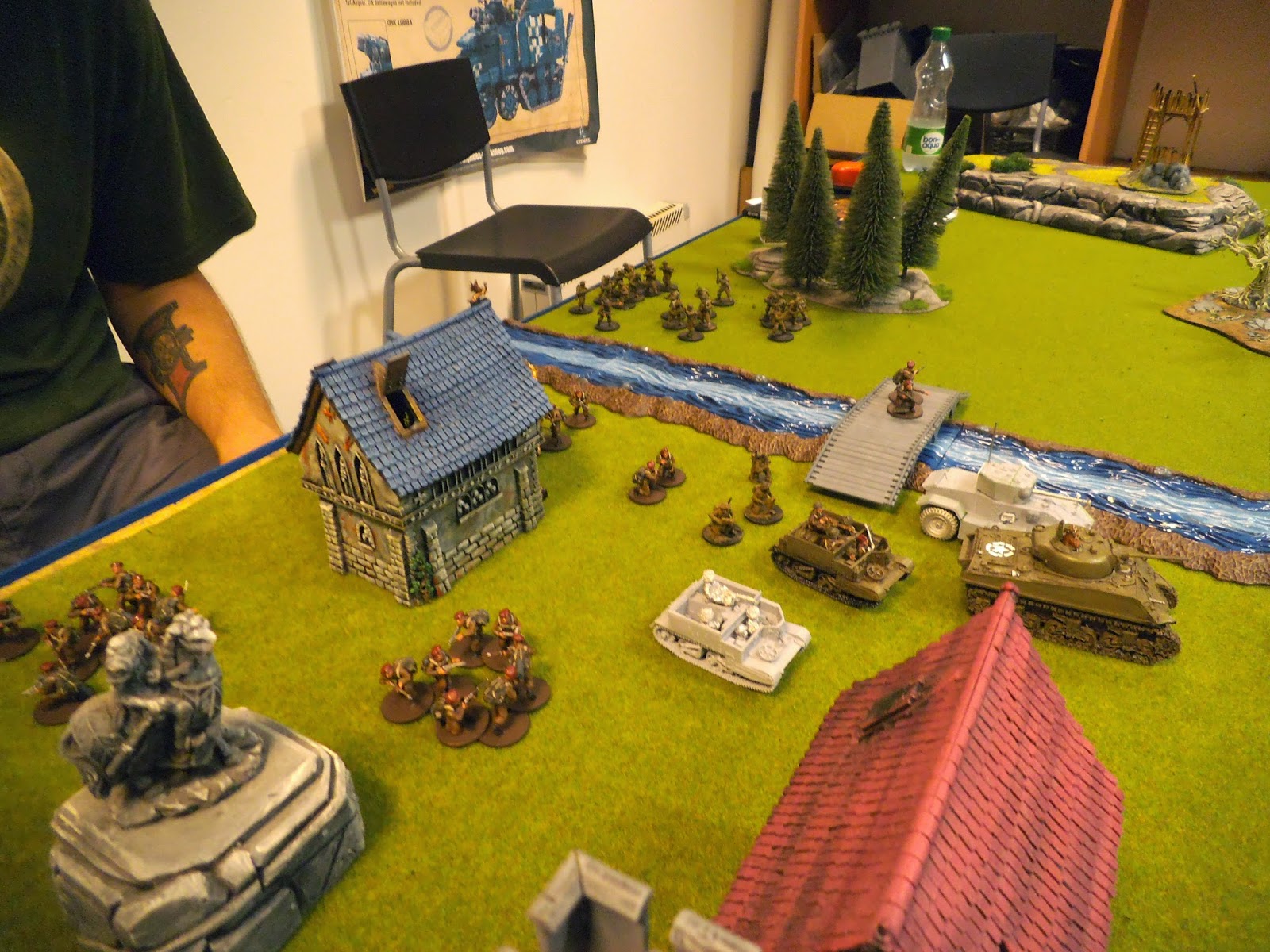 Our British allies were well equipped also as they brought commandos, troops, MMG carriers, a heavy armoured car and a Sherman. 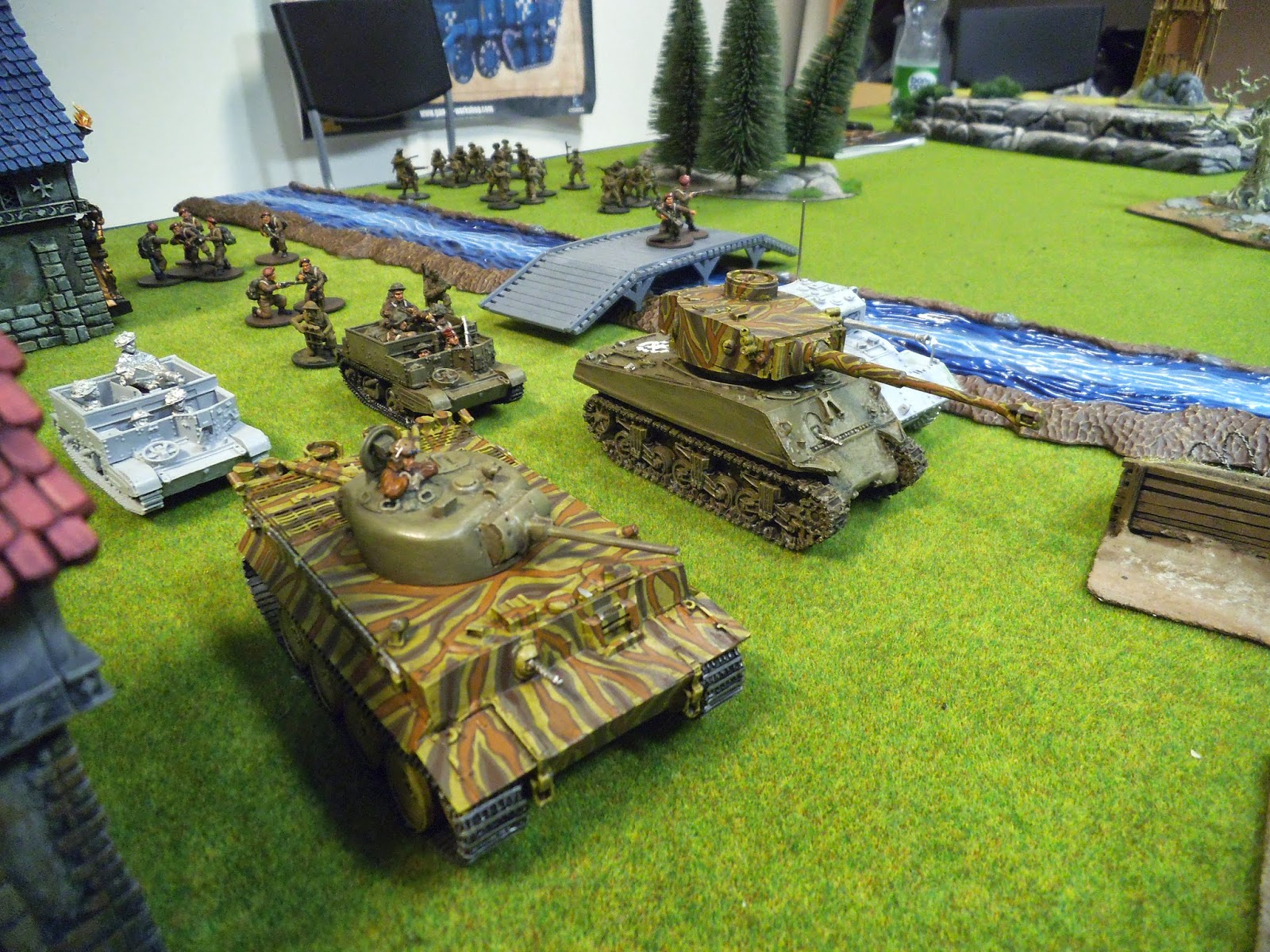 Just for fun we swapped turrets ;-) 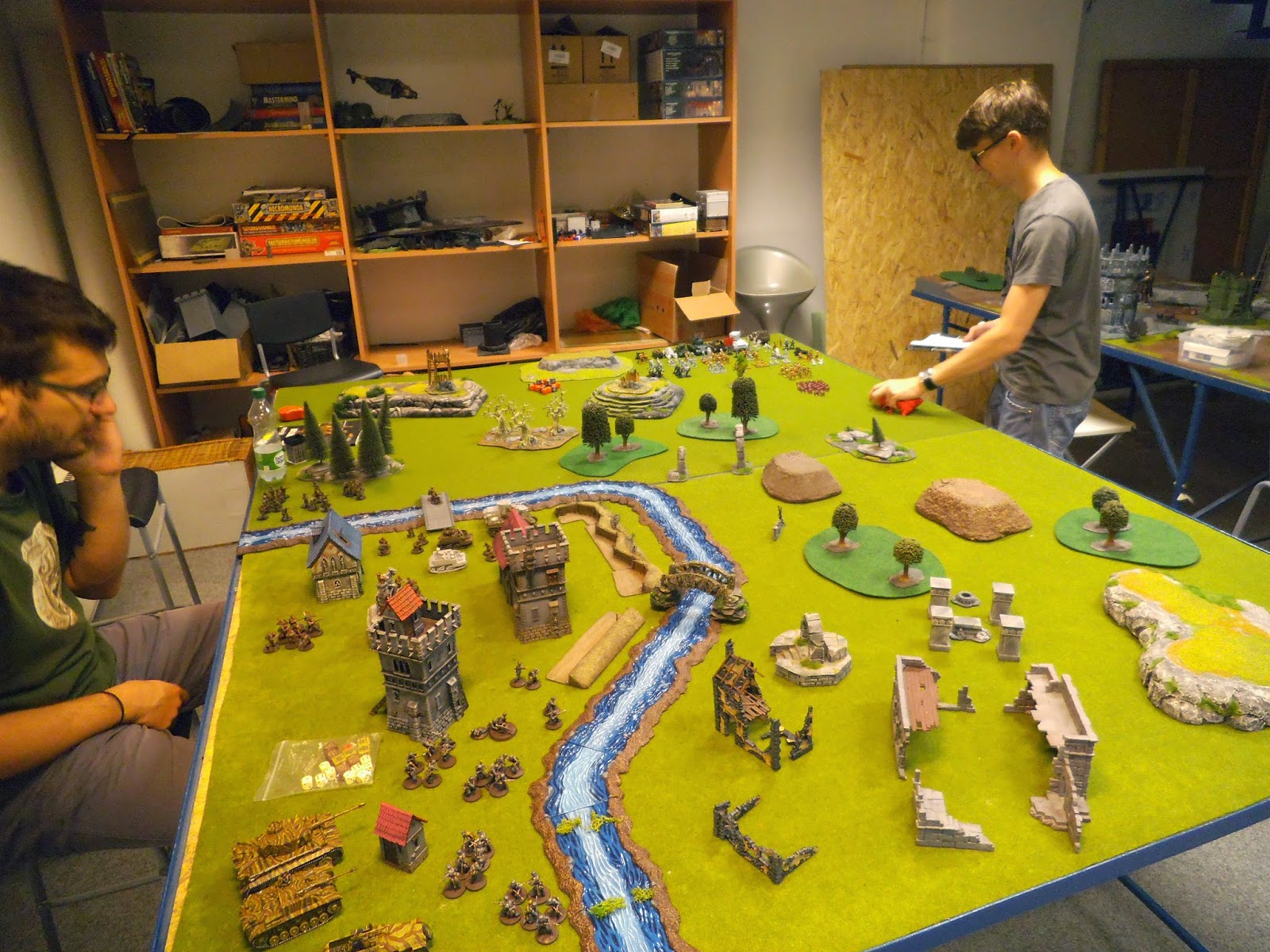 Here is our 8x6 table filled with terrain. The Soviets came in from the table edges at the back and to the right (from the picture's perspective). The German-British alliance was holding the village behind the river and could bring in reserves from the close and left edge. 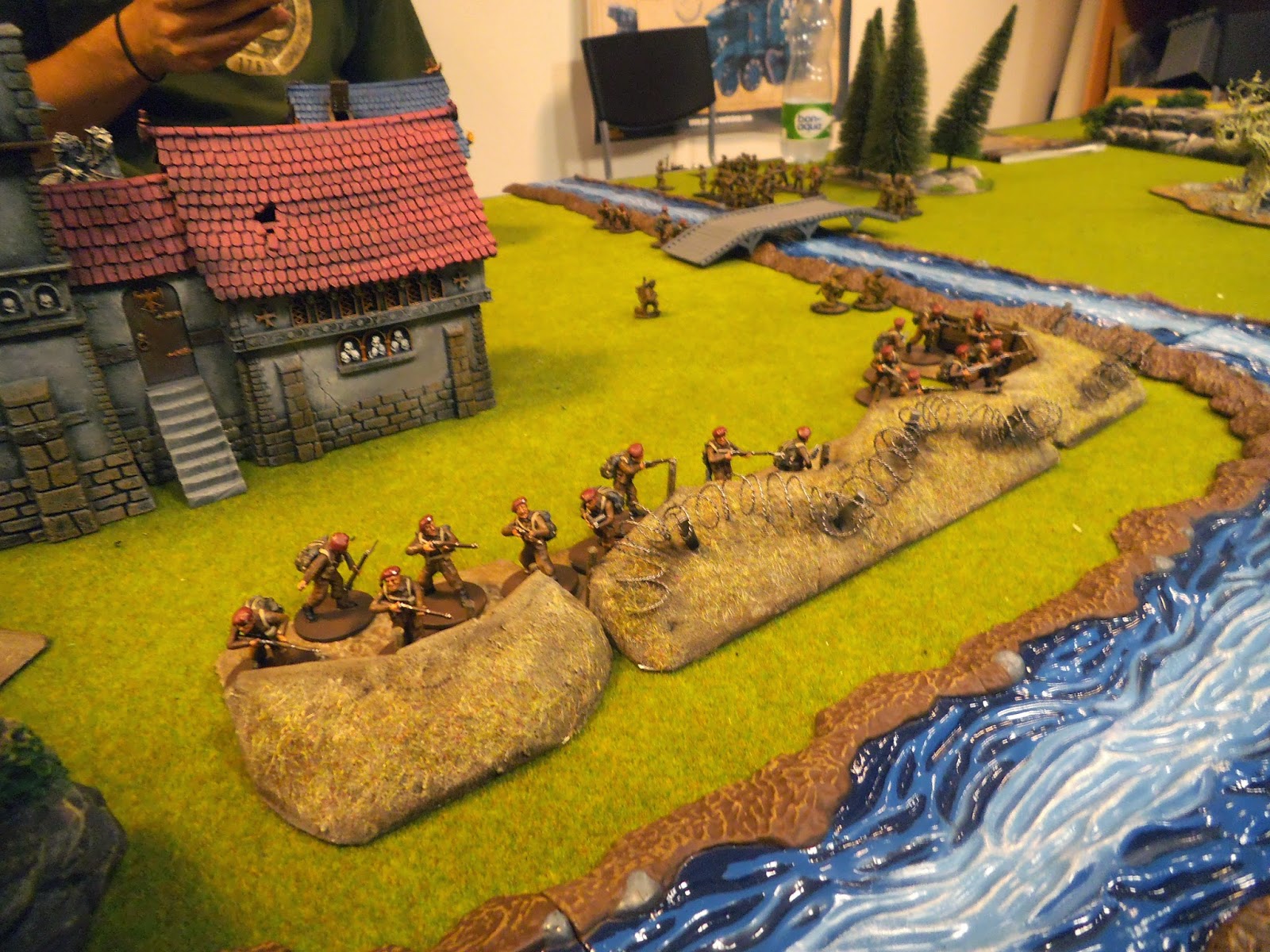 Brits take up defensive positions behind the barricades. Those damn reds better not try to cross in front of us. 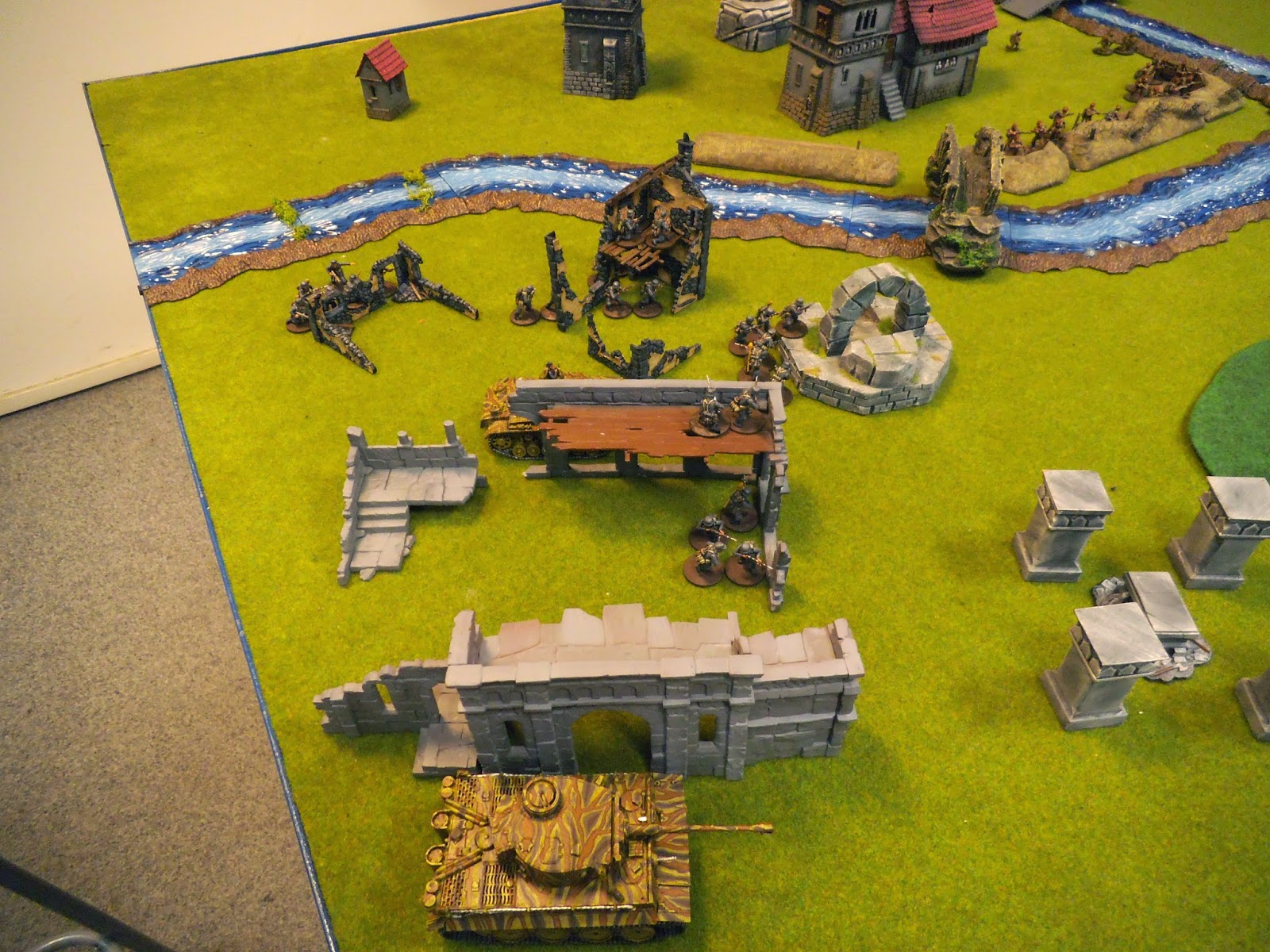 The German force held the flank, hoping to cut into the side of the Soviet advance. I was looking forward to flank shots with the Tiger's 88mm gun. 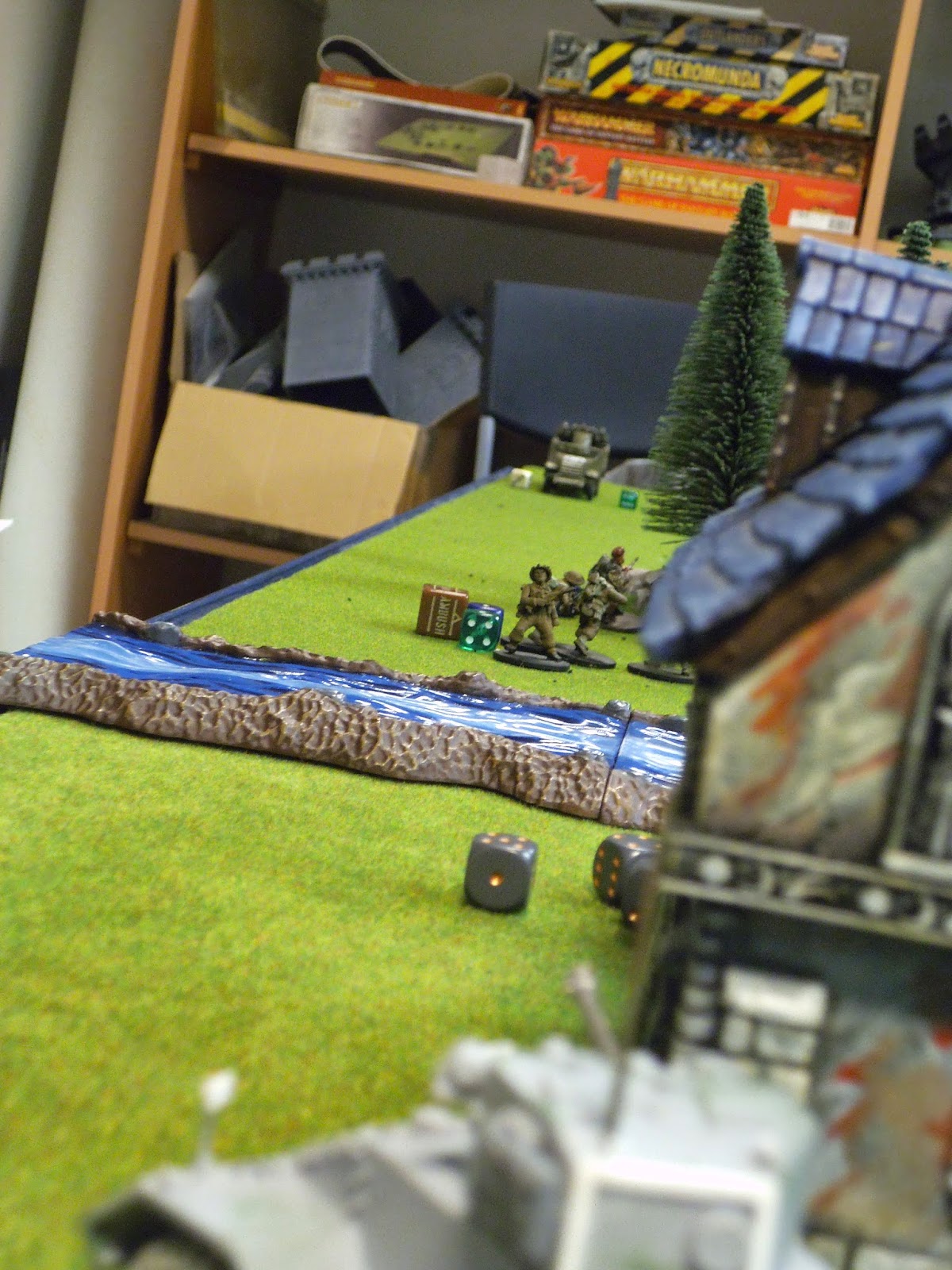 Starting the battle, the soviet AA vehicle revved onto the field and poured fire on the squad moving towards the trees. Sadly for the halftrack's crew, the armoured car spun around, lined up the shot and put a 75mm shell right through their vehicle. The surviving crew bailed out of the ruined vehicle. 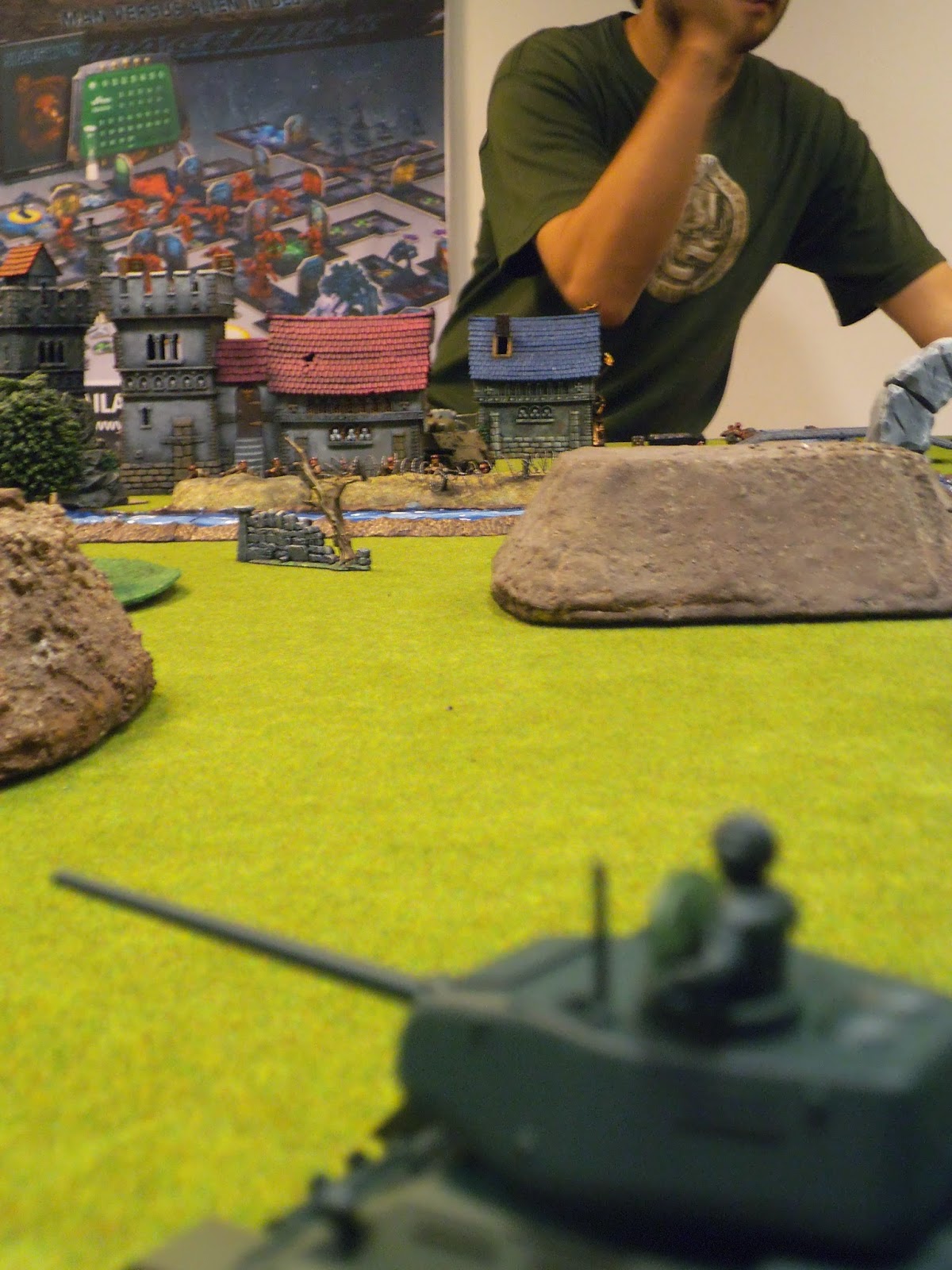 The T-34 rolled on here aiming for the Tiger. They bounced a shell off the front armour and then survived the Sherman's flanking fire (seen here). 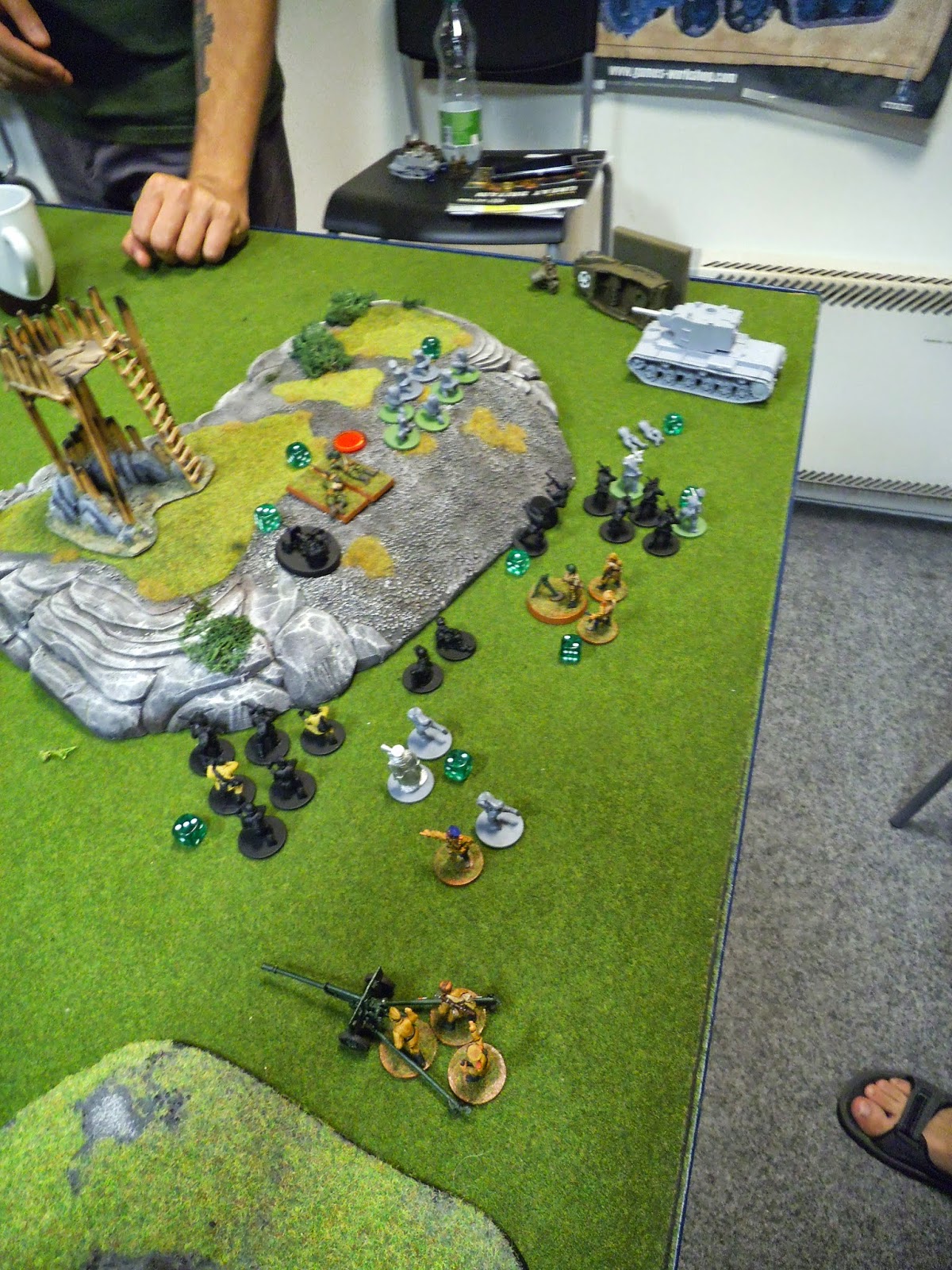 The second Soviet thrust came in from the flank. The British responded by calling down artillery fire. Sadly no direct hits were scored but we put a lot of pins on the enemy. 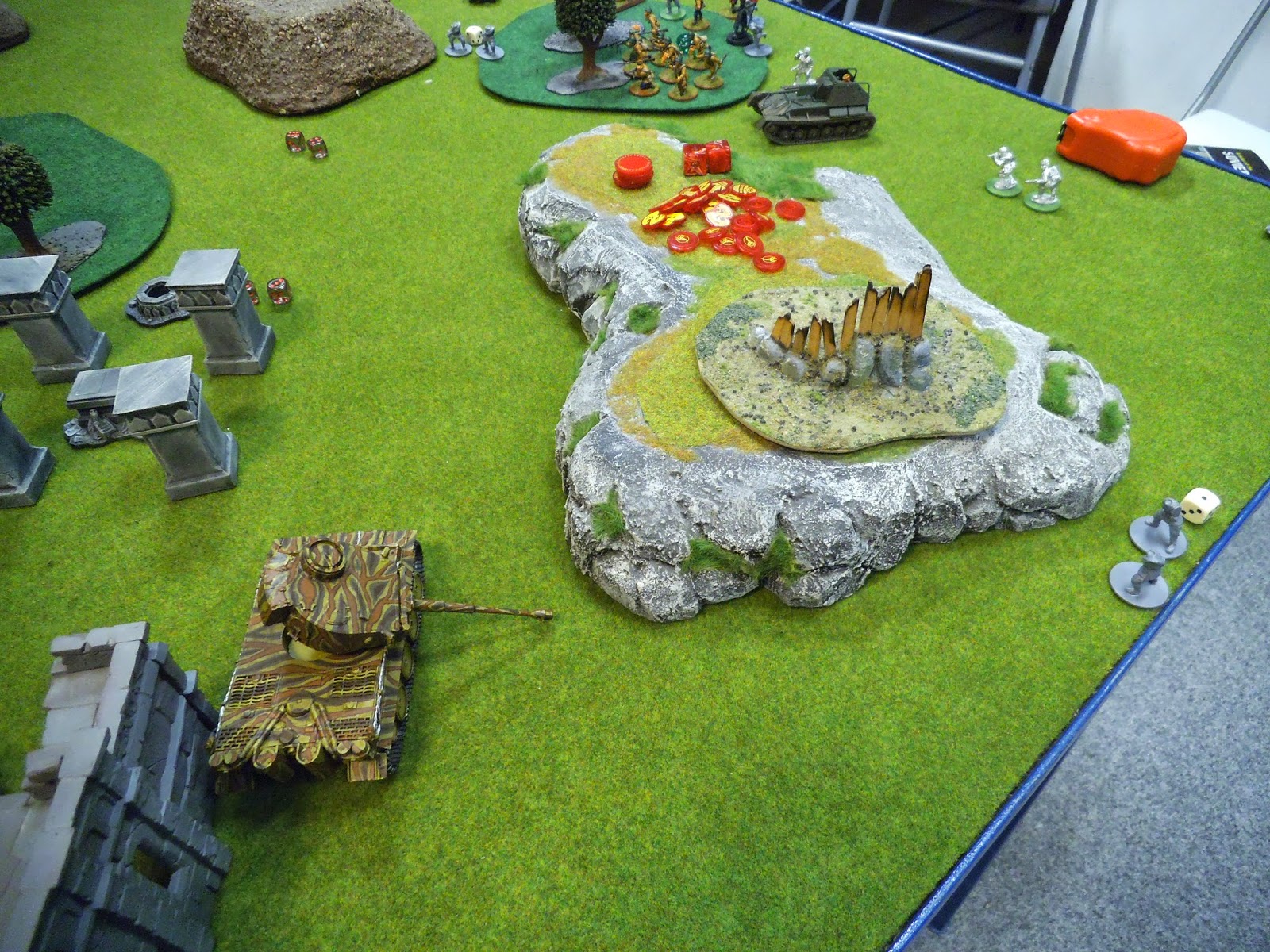 Then, evil, horrible, terrible disaster struck. I activated the Tiger, hoping to take out the T-34. The order check failed with a single pin and the veteran crew reversed before going down. Now, this wouldn't normally be a huge failure as they are pretty resilient behind all that armour right? Well yes, until your opponent brings on his anti tank dog team, rolls a 5+ to hit you, a 5+ to penetrate your armour and a 4+ to wreck your 500point tank. 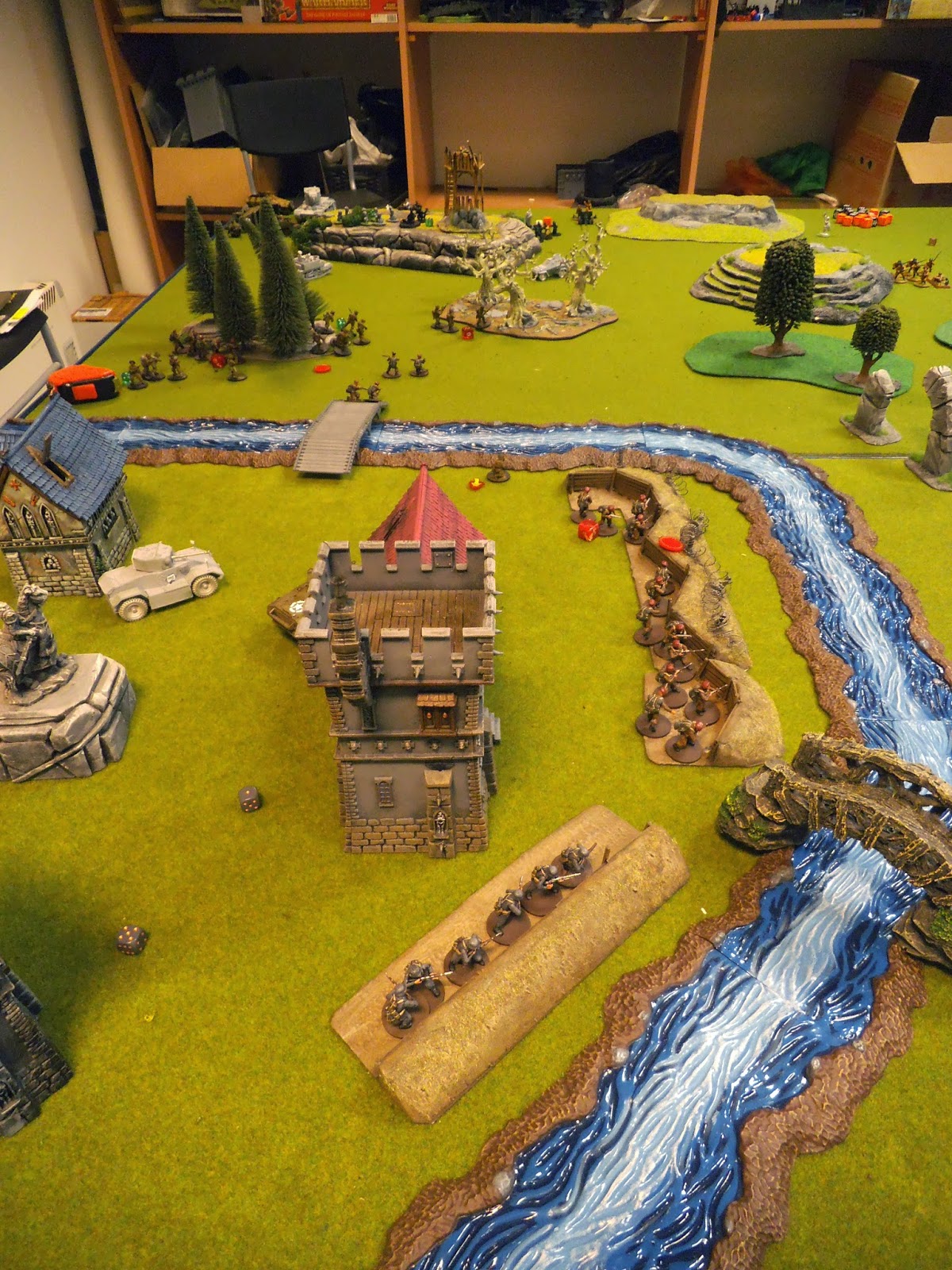 Our battle continued downhill as the Russians called in their artillery strikes. One pounded the British squads heading towards the flank, the other drew bead on the centre of our lines. The whistle of incoming heavy shells could be heard.... 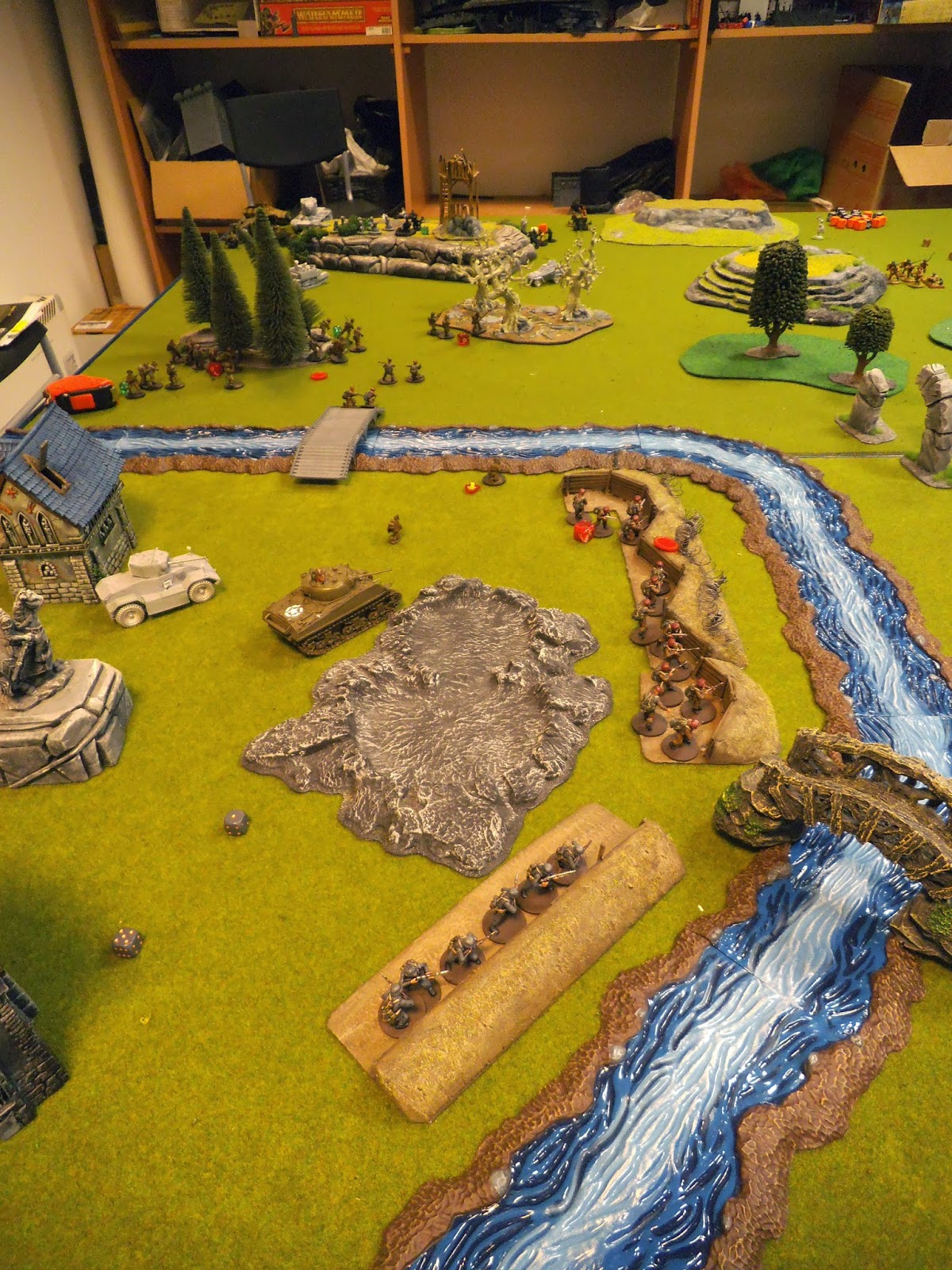 With an almighty crashing sound, a heavy howitzer hit took down the central building, burying snipers and machine gun crew under piles of rubble. 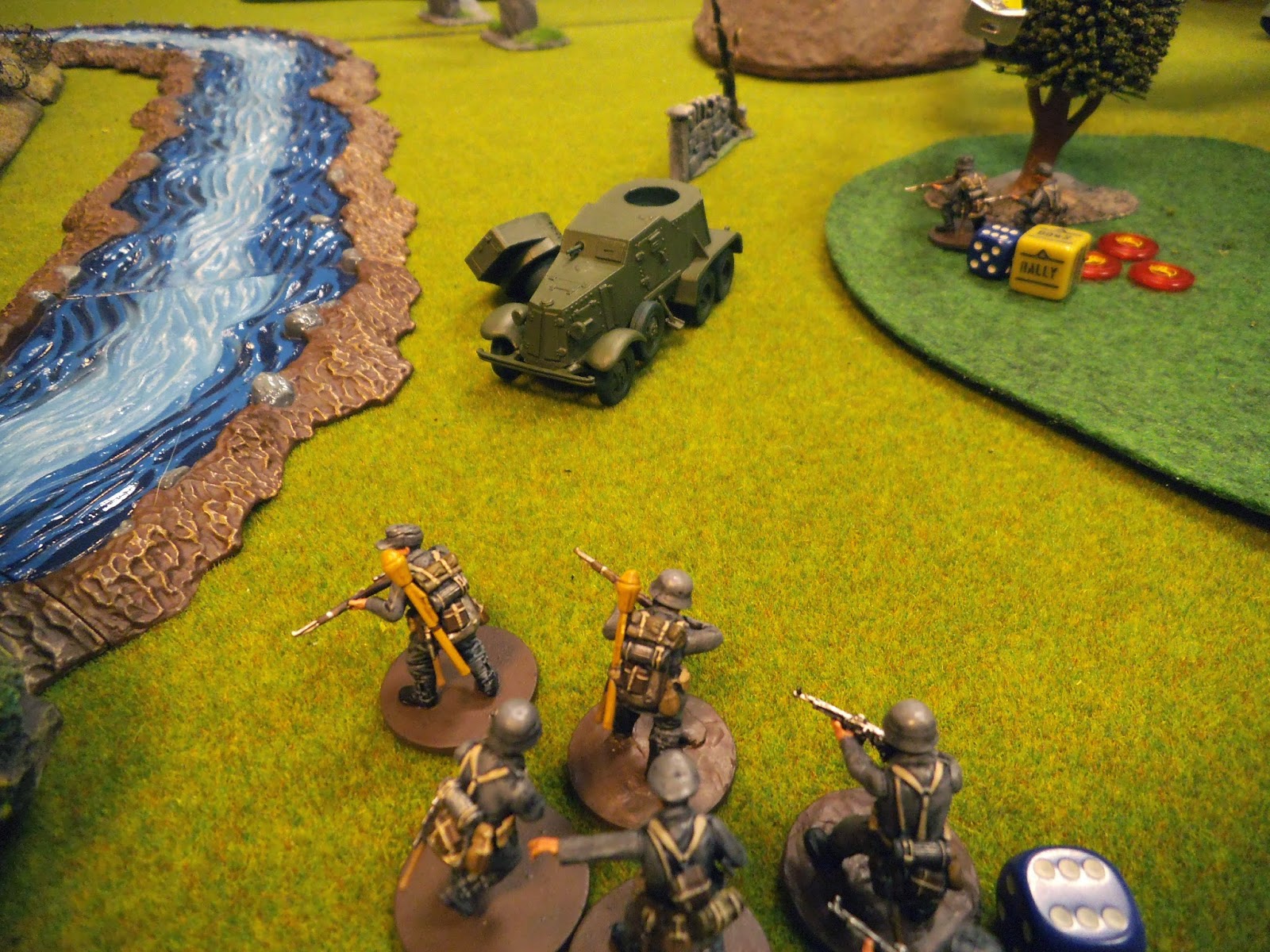 We valiantly fought back, with the BA-10 falling to panzerfaust shots. That'll teach you to bring an early war armoured car to a late war game where shaped charges have been introduced to the battlefield. Sadly this squad met a 76mm HE shell from the Su-76 before they could finish their victory dance and there were no survivors. 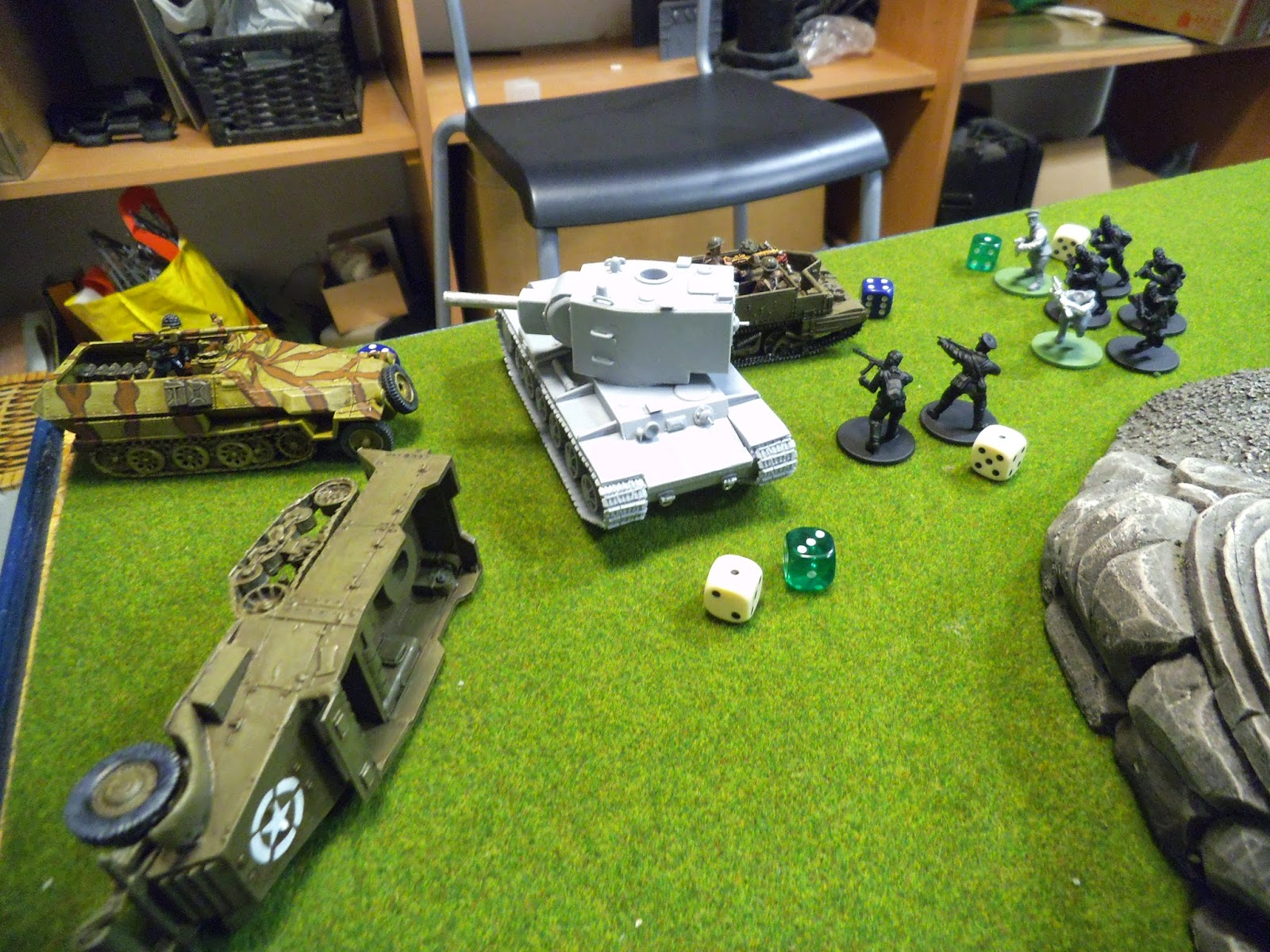 In the corner of the battlefield, the 37mm armed command half track tried to repeat its first success of immobilising the KV 2 but failed to penetrate the thick armour. Luckily for the crew, the massive tank couldn't seem to hit back, despite the point blank range. 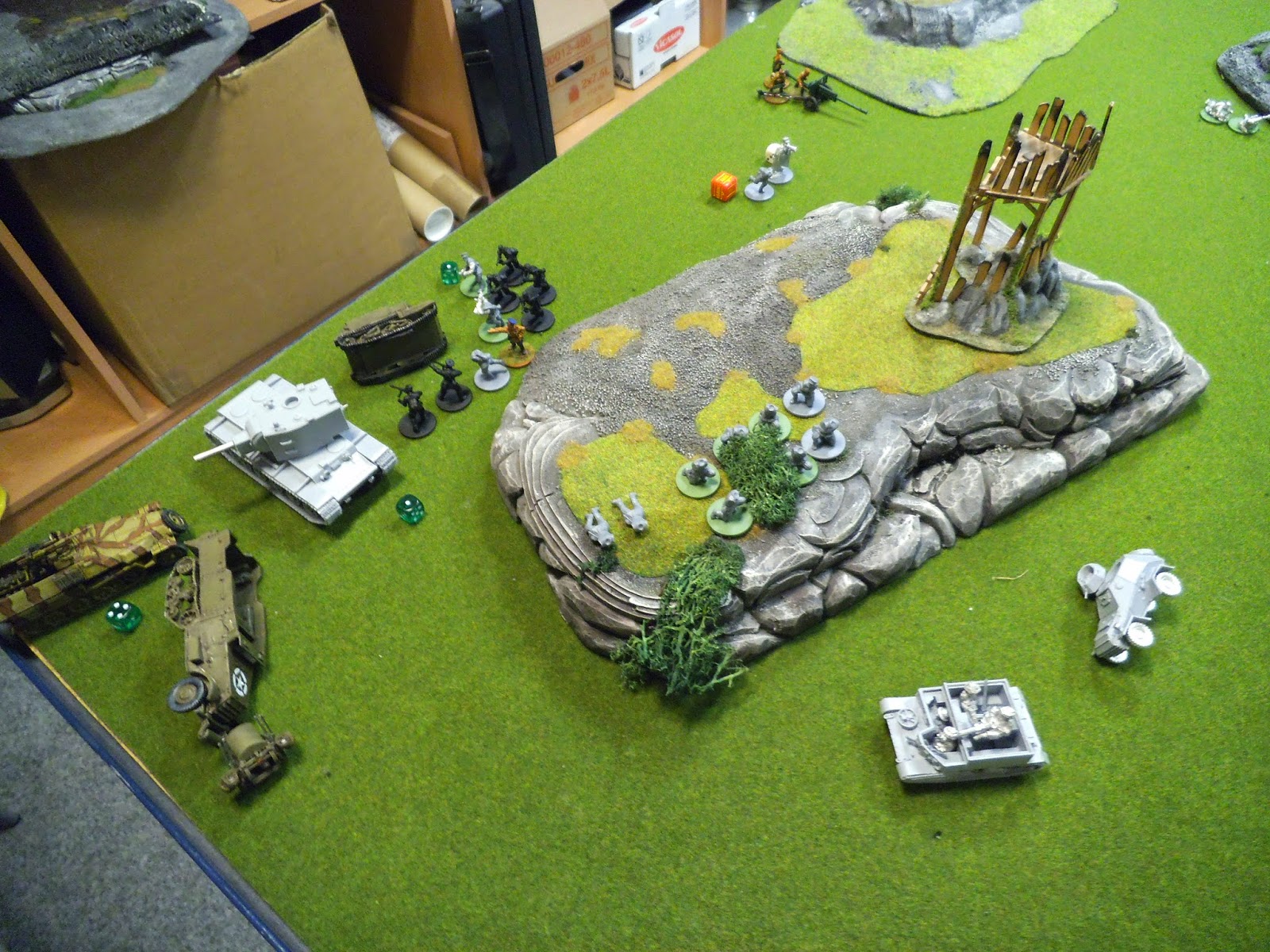 The left flank was totally held by the Russians, despite a flame half track attack taking out a machine gun, sniper team and the Ba64 armoured car. 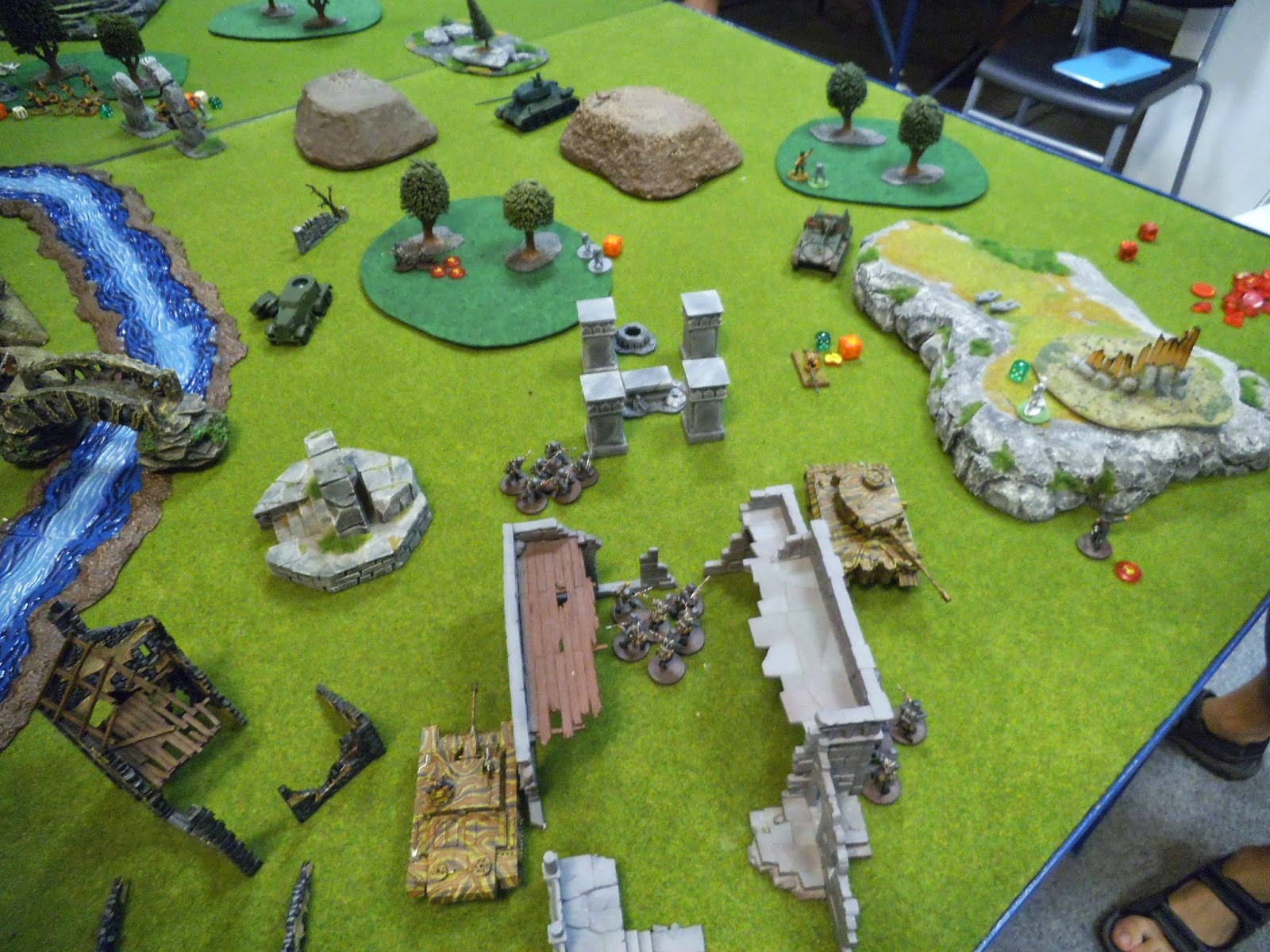 The Sturmhaubitz was next to suffer from the deadly Russian dogs as it lost a track to the canines. Luckily the squads around took out the attackers but the armoured vehicle was stuck taking long range pot shots to little success. 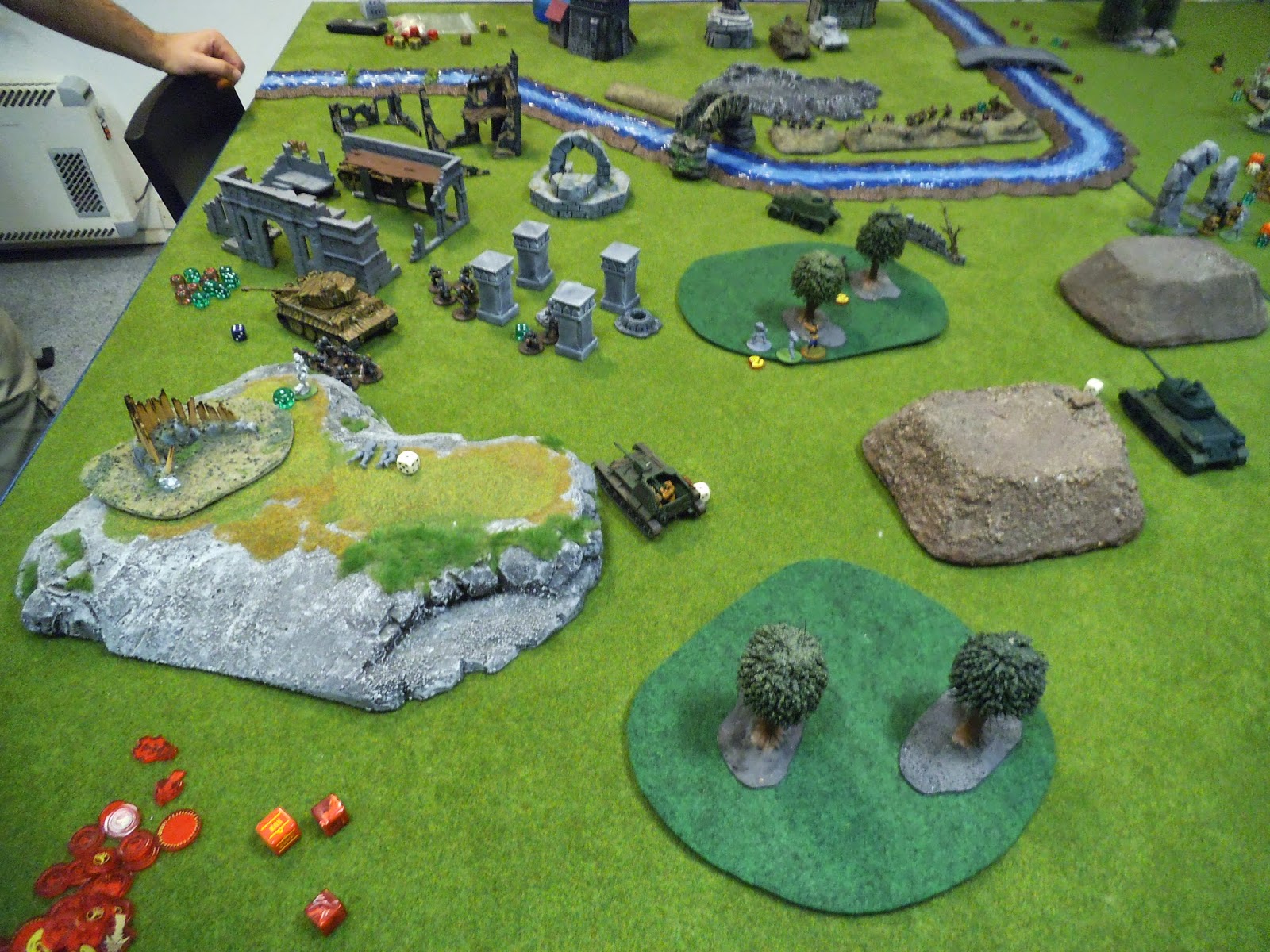 Next up, the Germans collected their panzerfausts and tried to bring them to bear on the Su-76. 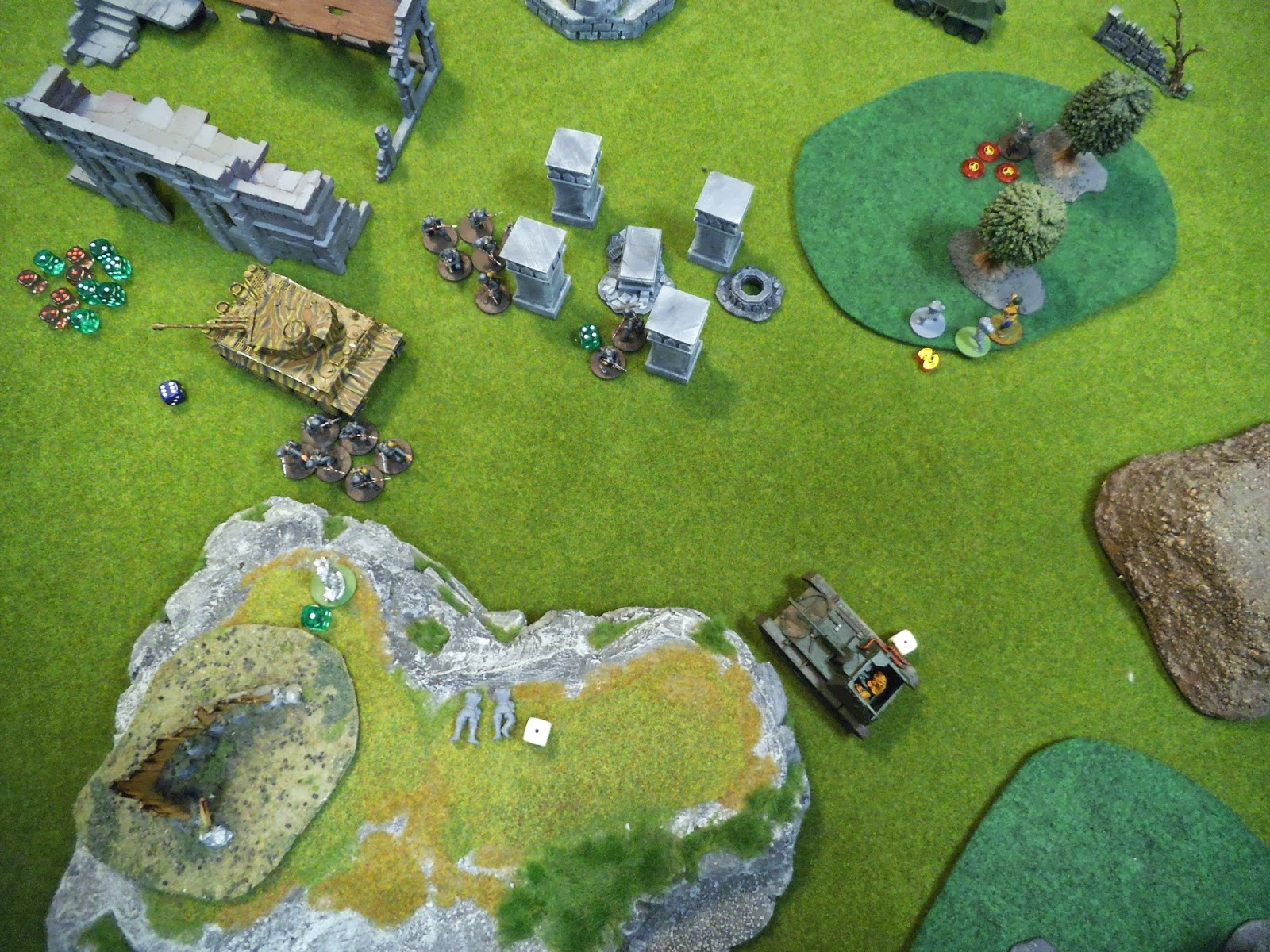 Sadly their efforts were in vain and the squads were battered back into cover by their Russian foes. Too many enemies and too little to throw them back with. 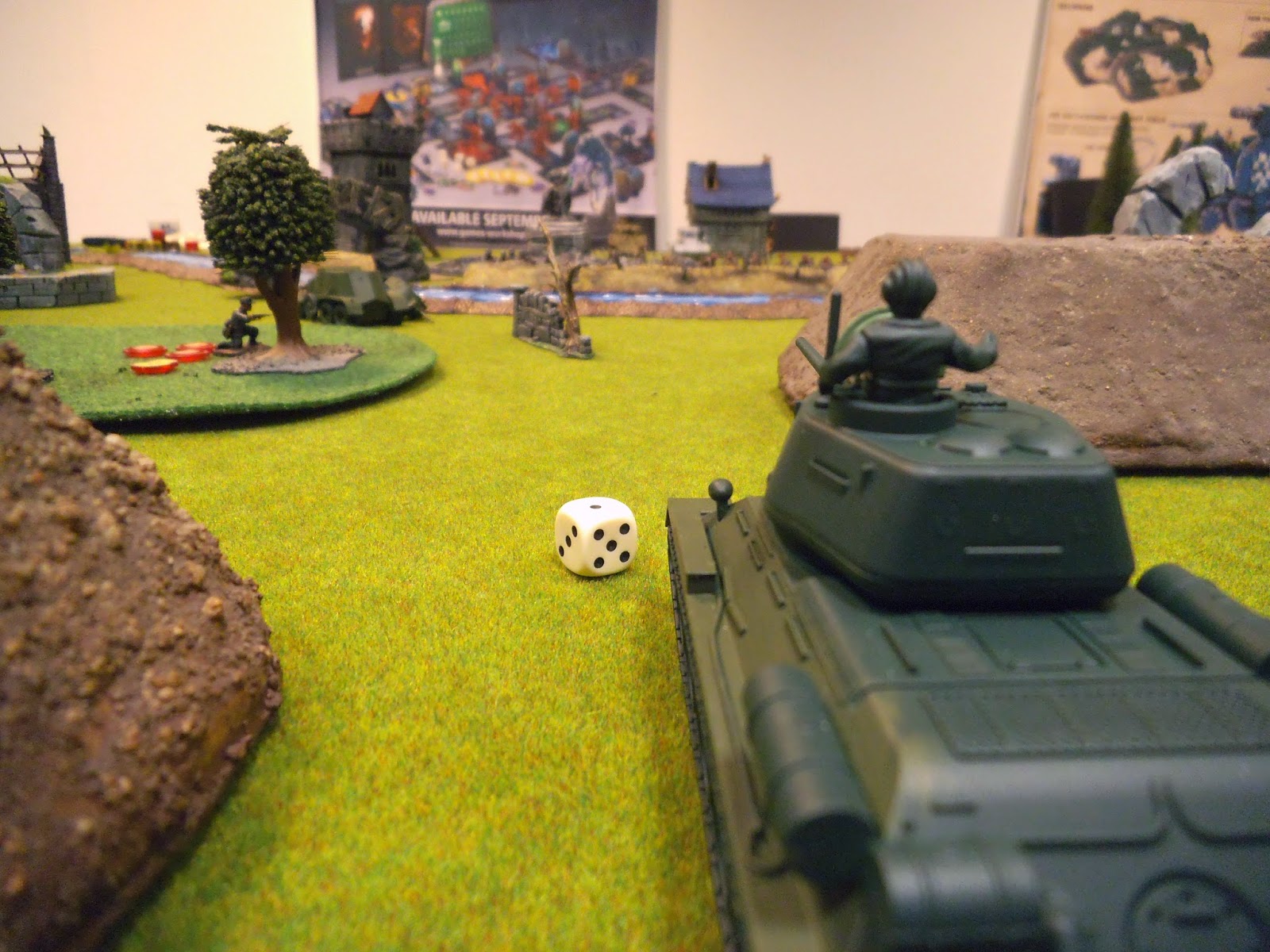 The Russian tank duels the Sherman and AEC armoured car, taking out the former. 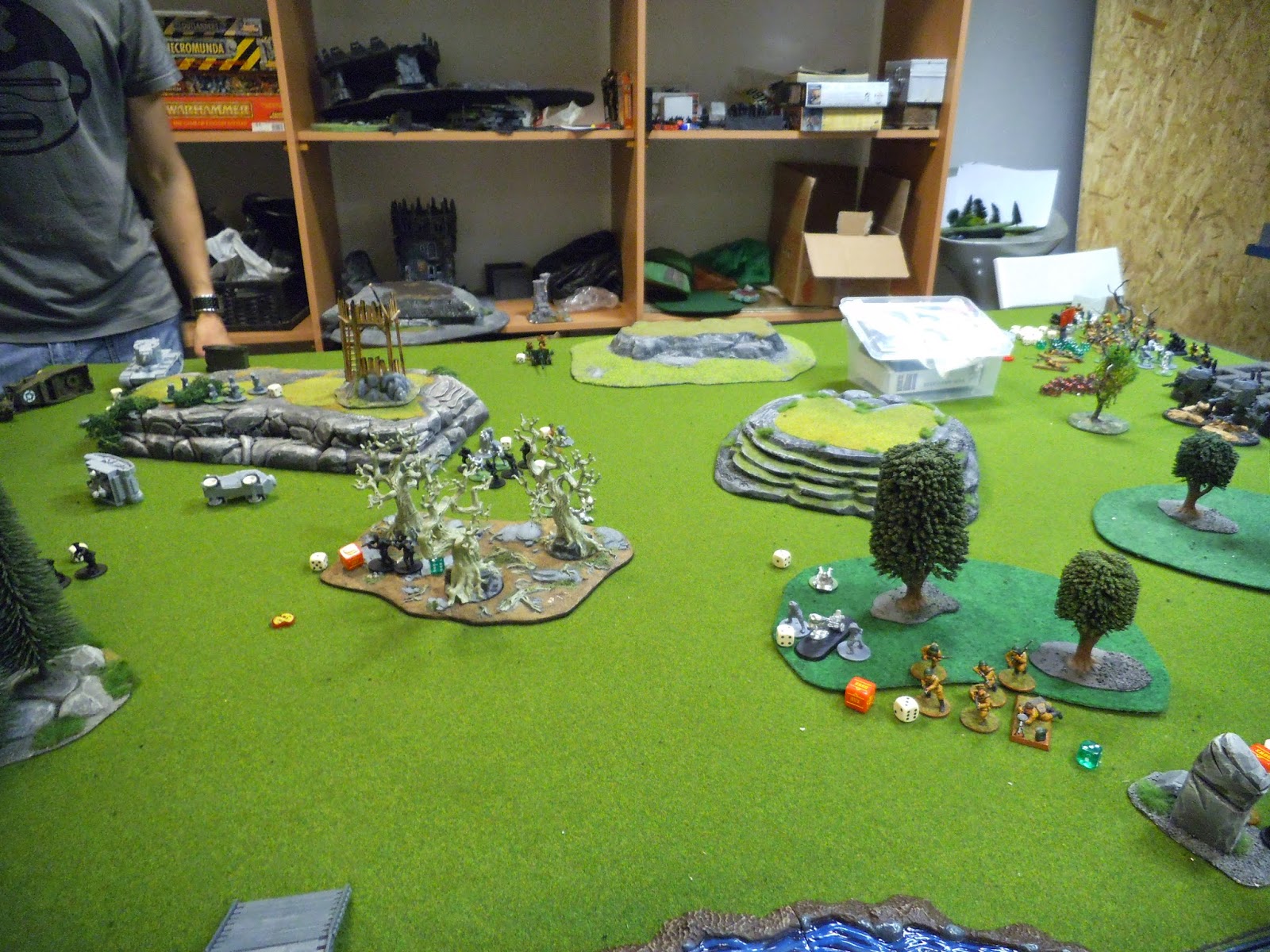 The left flank collapses completely and the Russian hordes swarm in towards the village.

At this point, after many hours of battle we called it in favour of the Red army. They put too much pressure on us, took out key units and left us scrambling to recover most of the game. My Tiger was too aggressively placed, the British led left flank lacked the ability to deal with the KV-2 and we just couldn't match up to the hordes attacking us.

It was a great game despite the loss and we hope to play a big game again in the not too distant future :-)